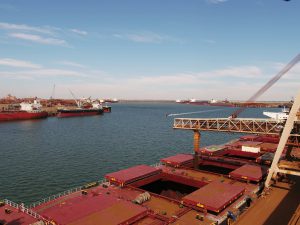 Pilbara Port Authority is a significantly large client of AMS Maritime and has been over the past 5 years. In 2012, AMS Maritime was engaged to design, install and maintain a Vessel Traffic Management System for Dampier Port Region.

This system provides vessel traffic management and monitoring from Onslow in south through to the newly established Mt Anketell Port north of Dampier. The system was installed in stages to meet the needs of increased traffic management during the resources boom in the North-West Region with the full system being fully functional and operational in April 2017.

In Feb 2017, AMS Maritime was successfully awarded the contract to Design, Install, Commission and Maintain an integrated Vessel Traffic Management System for Port Hedland the largest bulk port in Australia.

The Vessel Traffic Management System forms a key component of the $70 Million Dollar Integrated Marine Operations Centre that is in development and is being delivered to support the long-term sustainability of the port.

AMS Maritime is working closely with Saab, Kelvin Hughes, Silent Sentinel and Zetron to provide a state of the art, fit for purpose system for Port Hedland.

Currently AMS Maritime is conducting Detailed Design work with the assistance of Port Hedland, with the expectation that the system will start to be installed in the first half of 2018 and commissioned in the second half of 2018.

The Port Hedland VTS System will, on completion, consist of the world leading Saab Maritime Insight VTMIS Software integrated with the state of the art Kelvin Hughes SBS-900 SharpEyeTM Solid State X Band Radar system that will provide the detection and tracking capability of the system.

23 Silent Sentinel Low Light, Long Range Closed Circuit Television Cameras which will be installed around the port area to provide identification ability with the Zetron Voice Communication System providing the Port the ability to communicate with all vessels entering and exiting the port.

AMS Maritime has designed an ergonomic and state of the art Operational Centre where the port staff will be able to manage efficiently and effectively the day to day operations of the port.

A separate Emergency Incident and Response Room has also been catered for which will provide key stakeholders and decision makers an overall situational picture of the port at any time. The key stakeholders will have all available information made available to them using a purpose built and state of the art interactive Wall Screen.

AMS Maritime was engaged in 2013 by Darwin Port to Design, Install and Maintain a Vessel Traffic Management Information System in support of safely managing the increased traffic and vessel movements and the interaction between pleasure craft and shipping within the port during the construction phase of the INPEX Project.

In May 2014 AMS Maritime formally commissioned and handed over one of the most complex Integrated Vessel Traffic Management Information Systems in Australia to the Port Authority.

AMS Maritime in conjunction with Saab Technologies, Kelvin Hughes Limited and many other trusted partners designed a Vessel Traffic Management Information System that has enabled the Port Authority to safely manage vessel traffic through the port.

AMS Maritime supplied a complete VTMIS System using the Saab V3000 VTS Software integrated with the Klein Port Management System. This system allows the Port Operations Centre and VTSOs based at East Arm the ability to monitor the port in its entirety and communicate and track vessels approaching the outer regions of the harbour through to the ships final berth.

A port and harbour dedicated situational awareness Wall Screen Display was provided to enable the key stakeholders and emergency services the ability to monitor operations within the harbour and port in case of an emergency situation.

The final piece of the VTMIS System was the supply, installation and commissioning of the integrated Portable Pilot Units. AMS Maritime supplied the AD Navigation ADX XR Extreme Portable Pilot Units with the integrated Qastor Connect Software allowing the Darwin Port Pilots the ability to not only have high integrity and independent navigational sensor equipment but also receive display all traffic being monitored and managed by the VTS System thus providing them a full and complete situational picture when safely piloting the “K” Line Gas Ships.